Got a blog that you want to rank?

And yet not tried Brian Dean’s Skyscraper technique???

Yeah, you heard me right!

Although it is completely related to SEO, the relevancy on other aspects could never be ignored.

And I completely know that there are several other factors involved in a site’s SEO.

With just a little bit of SEO and the skyscraper technique, people have been successfully ranking many of their articles on Google.

Now before you misunderstand me, I would like to make it clear that I am not in any way shape or form an SEO analyst.

Neither is this blog related to it.

But the relevancy of the Skyscraper technique is not just confined to blogging, SEO, or ranking pages.

It rather holds true in every single field!

For those who are new to SEO, you must be wondering…

What exactly is the ‘Skyscraper Technique’?

Short and concise- It is a technique where one copies the content juice of top-performing blogs in their niche, and then make content out of it that is 4x to 5x bigger and better.

The rest of the SEO is a long story.

According to reports, Instagram nowadays seems to be implementing a brand new element intended for IG Stories that would enable users to develop video clips in ways which are quite the same as how video clips are made in trendy short-form video app TikTok.

So if you see an app trending now, there are high chances its attributes are soon going to be replicated to cut off the potential rise and draw away users.

Kind of like the skyscraper technique that I mentioned above.

But in a different aspect.

The latest feature, referred to as “Clips,” was first uncovered by Jane Manchun Wong through reverse engineering.

Outlined by Jane Wong, the IG team is currently working on a brand new, TikTok like tool called ‘Clips’.

Jane mentioned in her blog when she first found it out!

For those who don’t know Jane-

Jane Manchun Wong is a 24-year old Hong Kong-based lady, who as a passion searches for unreleased features within popular applications such as Facebook, Instagram, etc. 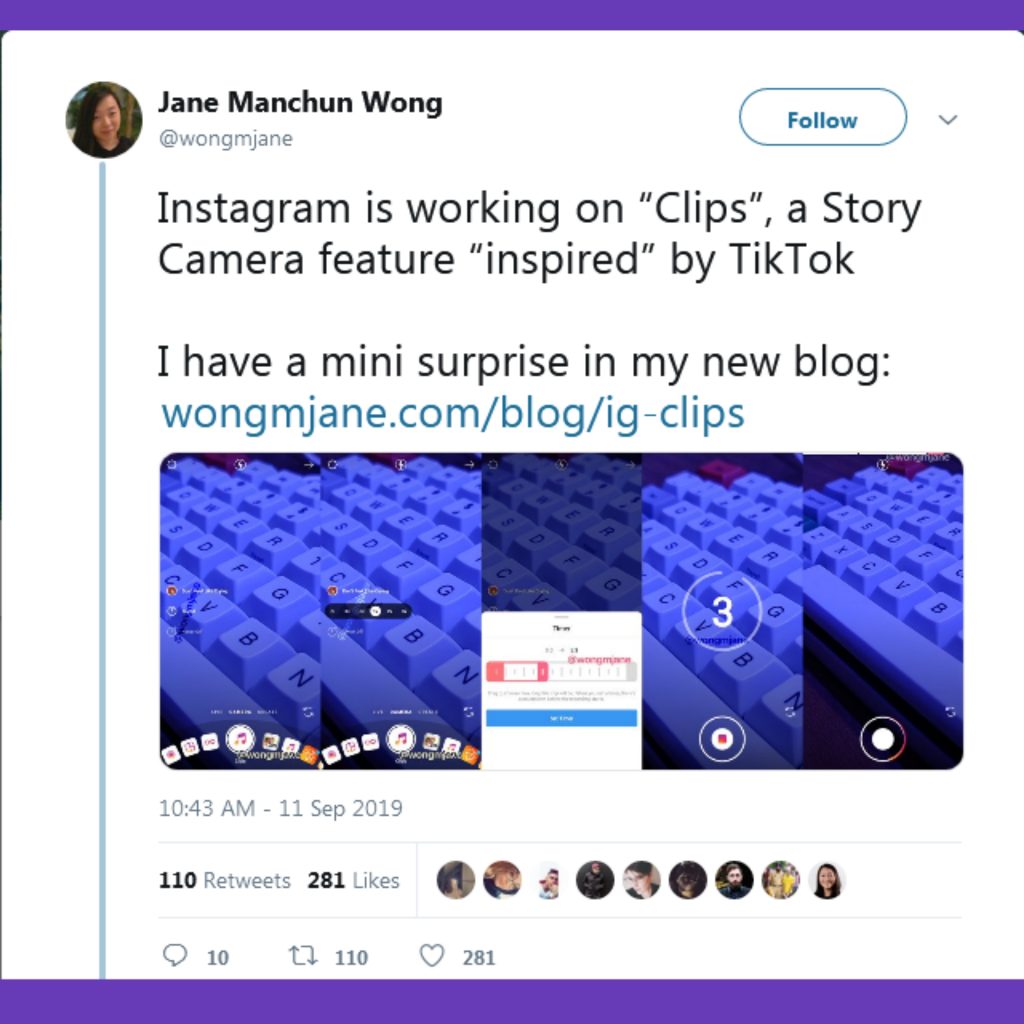 It’d make it possible for users to chain along with captured videos as one video recording, insert music, as well as modify every single clip’s speed and duration.

Wong mentioned- “Clips” enables end-users to share video clips on their Stories which can be captured in snippets and after that spliced together.

The option likewise tends to let users overlay sound on the videos, and then alter the length and rate of those video clips.

Do these features spark something?

If yes, you are correct.

These video-editing skillsets resemble the ones that are readily accessible upon short-form video app TikTok (a platform exceeding 1 billion downloads.)

TikTok currently provides users a complete collection of sounds and “music tracks” to include within their particular video clips, hence kicking off various viral social trends.

Instagram team is looking to incorporate such additional identical features to be able to battle opponents, and maintain its 1 billion-plus active users to keep away from such vibrant brand-new applications in the same way it did with Snapchat’s Stories, AR masks, YouTube, Houseparty, Squad, as well as, a wide range of various other applications.

Additionally, Instagram currently turned down Jane’s finding and did not give any statement on Wong’s observation regarding the recent Clips feature.

From the present scenario, it is unclear if Instagram will even release it.

But Jane’s post has definitely built some hype of this latest feature throughout the platform.

Jane’s statement on if it would release publicly!

Will the new feature be able to attract TikTok loyal users to opt for the photo-sharing platform?

And comments down below about thoughts, queries, and suggestions.